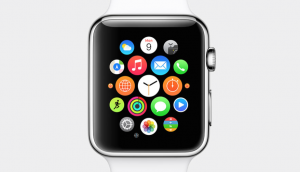 Will Apple Watch have the same impact on the wearables category that the iPod, iPhones and iPad products had on digital music players, smartphones and tablets, respectively?

Yesterday at their March 2015 special event, Apple formally unveiled its Apple Watch. It’s the first time since the launch of the iPad in 2010 that Apple launches a product in a completely new product category.

The event answered questions many had since the device’s debut in September 2014: How much will it cost? When does it ship? Where will it be available in stores?

Apple Watches come in three collections (the Apple Watch Sport, the Apple Watch and Apple Watch Edition), which range from $349 for the most affordable Sport model to $10,000 and up (as high as $17,000) for the Edition models.

They will be available for pre-order on April 10th and sold in Apple Stores beginning April 24th in 9 countries including the US, the UK, Canada, Australia, China, France, Germany, and Japan.

In addition to revealing the pricing and shipment dates, Apple’s presentation showed off the features of their new smartwatch.

However, yesterday’s event, though it answered a number of burning questions, raised one very key question: can Apple transform the wearables market?

Will Apple Watch have the same impact on the wearables category that the iPod, iPhones and iPad products had on digital music players, smartphones and tablets, respectively?

In true Apple fashion, they are entering a market with a number of established players, including smartwatch market players like Samsung, LG, Sony, Google, and Pebble and fitness band makers like Fitbit, Jawbone, and Misfit.

And wearables have been “the next big thing” in mobile for a few years, continuing to garner attention, most recently at the 2015 Mobile World Congress.

So it seems like Apple is once again in the right place, at the right time. In order to succeed, however, Apple Watch will have to overcome a number of challenges other wearables have faced.

Let’s first take a look at some of those challenges and then at the implications for Apple Watch and your mobile strategy.

Apple describes their watch as “a comprehensive health and fitness companion.” Traditionally, wearable fitness products like Fitbit and Jawbone have featured sporty silicone bands that are fine for more casual settings but not a chic, high-end fashion accessory. (yes, Fitbit has Tory Burch products, but it’s not the first image that comes to mind when most of us think of activity trackers)

Design of course is Apple’s forte. And Apple went all out to make their smartwatches beautiful and luxurious, even recruiting the former head of Yves Saint Laurent, Paul Deneve. They tout the quality of their smartwatches’ components and attention to detail, including stainless steel that is 80% stronger than regular steel, a Link Bracelet that takes 9 hours to mill and a “jaw-dropping, beautiful 18-karat gold” for their higher end watches. And even though their Sport watches come with a rubberized plastic sport band, they can be easily changed out via the interchangeable custom strap system.

A Nielsen survey gathered as part of their Connected Life Report found that nearly half of Americans surveyed expressed cost as likely being a limiting factor to wearable tech adoption. Nielsen also reported “72% of users said they wished wearables were less expensive.”

So what does this mean for Apple? Apple is comfortable being a premium product when it comes to laptops, smartphones and tablets. For their smartwatch, their $10,000+ Edition model supports this luxury positioning. And even the $349 price tag of the most affordable Apple Watch model is more expensive than other popular smartwatches on the market. It’s 3.5 times the price of a Pebble, 1.4 times the price of the Moto 360 (which uses the Android Wear OS) and 1.2 times the full price of a Samsung Gear S.

What’s even more interesting is that Apple is coming out of the gate with such a wide range in their pricing. Their price range of $349 to $17,000, as noted by Wired, “simultaneously attacks the low-end of a new market and the high-end at the same time. It is competition for both $200 G-Shocks and $25,000 Rolexes." This is not only a departure from what Apple tends to do, it’s also an unusual business strategy for most industries. Furthermore, Apple doesn’t tend to be shy about charging what the market will bear and as a recent article in The Guardian pointed out, “that $350 price tag makes it the cheapest new category Apple has ever introduced – the original iPod, in 2001, was $399.”

Battery life is another key issue for most mobile devices, and wearables are no exception. During last year’s Wearable Tech Expo in New York City, Pebble’s chief evangelist Myriam Joire shared,“Battery is the number one challenge with wearables today.” Pebble latest watch, Pebble Time lasts 7 days. The Moto 360 lasts about 12 hours under heavy use, and the Samsung Gear S also lasts about a day.

Apple Watch has “all-day battery life,” which is based on 18 hours. During that time you can get 90 notifications, 45 minutes of app use, 90 time checks, and do a 30-minute workout with music playback. Or you can talk for 3 hours, work out for 6.5 hours, or get 6.5 hours of audio playback. You can use it solely as a watch for 48 hours, but that of course defeats its purpose. The watch takes 2.5 hours to fully charge and 1.5 hours to charge to 80%. So** compared to other fitness monitors, Apple Watch’s battery life compares poorly. But compared to other smartwatches, at least according to its claims, it’s right in line**.

Yesterday on stage, Apple’s Chief Executive Tim Cook proclaimed, "Apple Watch can be an incredibly rich and integral part of your life.” In order to accomplish this goal, Apple Watch will in fact have to become more than just another device to carry around on our persons. This struggle for long-term stickiness is one that wearables, particularly those focusing on health and fitness, have been battling extensively. And it's really at the core of whether or not the Apple Watch will succeed.

In a survey by Endeavor Partners of 6,223 American adults, half of the respondents said they no longer used their activity trackers and 1/3 stopped using their device within six months of acquisition. In another survey by CCS Insight, 40% of those who had purchased fitness trackers had stopped wearing them within six months. Whether it's 3/10 or 4/10 of consumers who stop using their activity trackers within 6 months, the challenge is clear.

Here is where Apple Watch has a distinct advantage. Via the Glances feature, you can “very quickly check for things you check most frequently.” You can check the weather and your calendar, control your music and even check your heart rate. You can pay for purchases using Apple Pay. A tap to the wrist alerts you to text messages and emails, which you can read in full. You can answer calls using the built-in speaker and microphone. And given that people check their phones for messaging 23 times a day and for a voice call 22 times a day, if the Apple Watch manages to become the go-to device for checking these, it becomes very relevant.  Plus the watch also has unique digital touch features including tapping your watch to get your friend’s attention.

As one would expect, Apple Watch supports third party apps. A robust apps ecosystem, we all know, was key to the iPhone’s success. Apple already has some early partners which have developed apps for Apple Watch, including Facebook, Uber, BMW, and Instagram. Given that time spent on social networking apps was up 49% year-over-year in 2014 and smartphone users check networks like Facebook 14 times a day, partnerships between Apple and top social networks make a lot of sense.

Even with the limited number of partnerships with which they’re debuting their watch, one can see that Apple Watch can offer you the convenience of many of your favorite mobile activities as well as handy functionality you may not be currently leveraging on your phone. For example, the BMW watch app allows watch owners to check their electric cars’ battery level and if the car doors are locked. And the Alarm.com app allows you to open the garage door from afar for a locked-out family member.

The question is now, will developers flock to create apps for Apple Watch? Early indications are that it’s a possibility. Apple released the WatchKit SDK in November and since then developers have been creating thousands of new apps.

Implications for Your Mobile Strategy

This also brings us to another important question:** should your enterprise develop an app for Apple Watch?** Ultimately this depends on a number of factors, but one thing to keep in mind is that as Kevin Lynch, VP of Technology at Apple, put it, “Using Apple Watch during the day is really about brief interactions.”

In fact, Apple is suggesting developers design their app to be used in 10 seconds or less. This brevity of interactions distinguishes the use of the mobile device on your wrist from the one in your pocket. And it creates another way for you to interact with your customers during their mobile moments.

When thinking about how Apple Watch apps might fit into your mobile strategy, it's important to keep in mind that these new devices are not meant to be a separate silo.** **Apple Watch is meant to be used together with your iPhone. You use your phone to download apps from the Apple Watch Store, and Apple Watch relies on the iPhone to connect to the Web and to other devices.

Furthermore, Apple Watch experiences connect back to your iPhone and their Apple App Store counterparts. The Guardian's Apple Watch experience, for example, allows the reader to at any time "handoff to their phone for the full iPhone app experience of what they were looking at, ensuring a seamless reading experience." The Salesforce Apple Watch Analytics App, as another example, provides users with timely insights while making it easy to "work seamlessly between Apple Watch and iPhone."