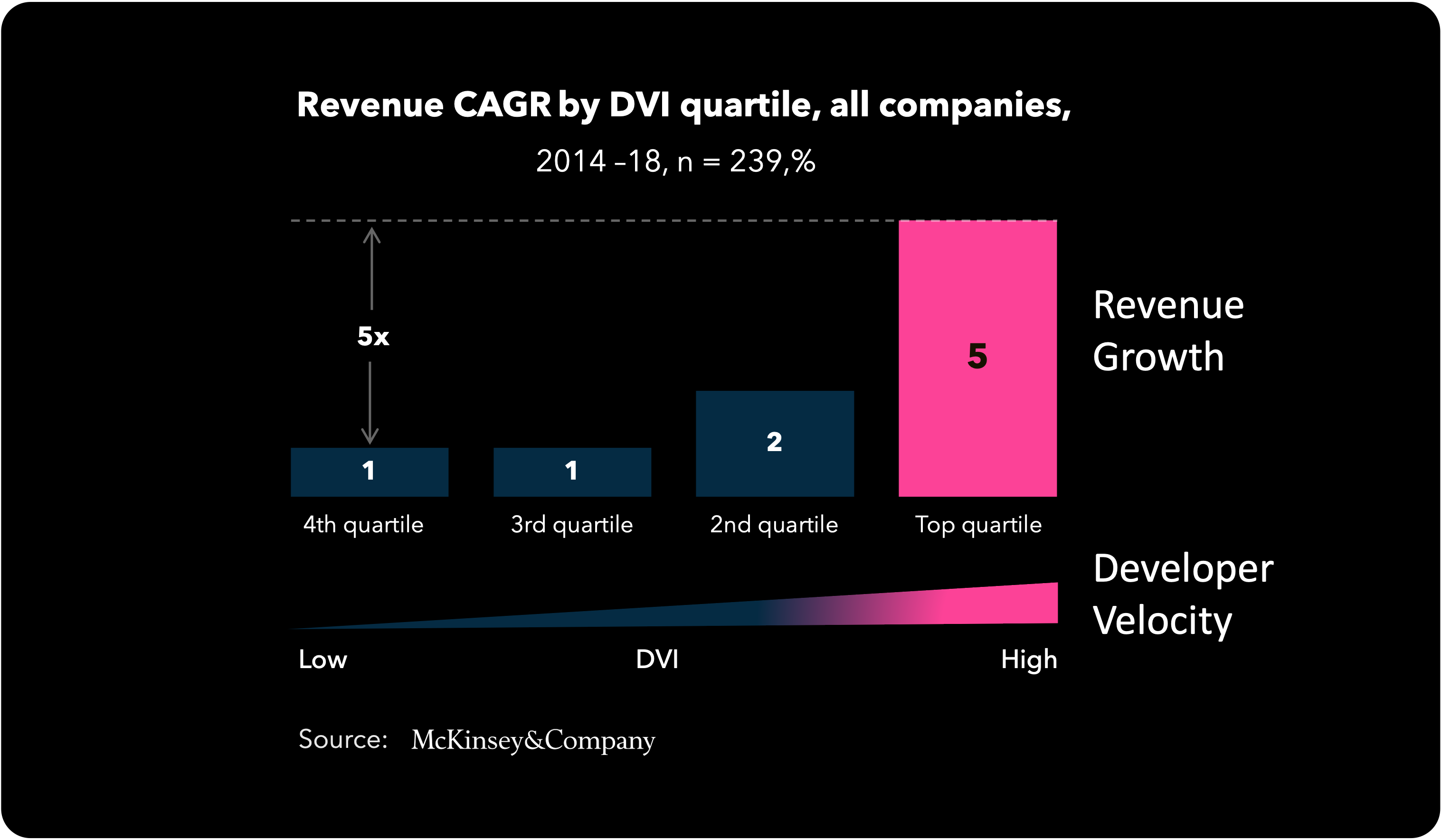 Hats off to the team that makes your website shine. Building, managing, debugging, updating, securing, and monitoring a modern web application can require stitching together more than 20 disparate cloud primitives and web services. It isn’t easy — your team battles dragons every day to do the best for your business.

But what if they didn't have to battle as many dragons? What if they could release updates twice as fast? What if they had critical information at their fingertips that could impact the bottom line? And what if your website loaded in the blink of an eye? Imagine what could be accomplished.

Builder velocity is strongly correlated with both company revenue and cost savings.

The results were stunning. Companies’ revenue growth is up to five times higher if they have top-tier developer velocity.

By looking at the revenue and deployments to production in the Software, Financial Services, Retail, Automotive and Manufacturing verticals, McKinsey’s study found that companies in the top quartile of the developer velocity index (DVI) outperform others in the market by 4-5x.

As 'software eats the world', the speed at which you ship updates determines whether you will sink or swim in the market.​

Over the last 10 years, AWS (Amazon Web Services) has completely transformed how we buy and use software and hardware infrastructure. They and competitors have created thousands of point services — cloud primitives — such as compute and storage. These services have become the hammers and nails that teams have had to assemble and maintain in order to build web applications.

Unfortunately, in too many cases the effort has grown out of control. Organizations have gathered entire teams of scarce, expensive talent. And too often, the bulk of their resources are now spent simply keeping the application operating at scale. Many teams are bogged down with non-functional requirements (NFRs) such as interoperability, reliability, scalability and the other ‘itys’. Many spend more time on NFRs than on improving the app itself.

Today, over 20 ‘cloud primitives’ are typically required to deploy a modern web app. Many enterprises use at least three vendors across cloud infrastructure, CDN, security, observability, and continuous integration / continuous deployment. Here’s an example of the components that must be assembled for a web application:

Modern web apps require several tools for service and edge configuration, domains and security, health checks, and development. Worse, the work is not easy and requires experts who are hard to recruit and retain. Some CTOs have complained that they train these experts only to have cloud vendors poach them.

Fragmentation makes it impossible for vendors to natively supply the requisite components for a fully integrated toolchain. That does not change the reality, however, that developers are forced to borrow time from writing code and redirect it towards managing the issues associated with highly complex, multi-factor developer toolchains held together in places by duct tape and baling wire. This, then, is the developer experience gap. The same market that offers developers any infrastructure primitive they could possibly want is simultaneously telling them that piecing them together is a developer’s problem.

This developer’s problem can stall developer velocity, which can stall revenue growth.

The good news is that there’s a better way to build, manage, debug, and update your apps and APIs. Teams can harness the power of those 20+ cloud primitives with a single platform.

Focus is shifted from the complex plumbing to efficient optimization, leading to faster and more reliable releases. This is all thanks to a rapidly growing movement called AppOps, also known as Jamstack platforms. AppOps is disrupting the traditional CDN market; the CDN and edge computing can now be a simple feature within a much larger offering, much like the digital camera became a feature within smartphones after the iPhone launched.

Layer0 by Limelight is a builder-friendly AppOps platform that lets teams focus on improving their apps without distraction, while running on one of the world’s largest and highest-performance proprietary global networks. This platform stands out above the rest based on five core benefits, including the ability to deploy quickly, integrate security, release with confidence, evolve toward a microservice architecture, and save money.

Teams on Layer0 release up to twice as fast as ordinary teams with built in productivity tools, including pages that shows at-a-glance opportunities to improve performance and

Managing the edge is simplified with EdgeJS, a JavaScript-based, performant, declarative, and framework agnostic edge configuration language. EdgeJS can be embedded within the frontend application and because it's declarative - developers only have to describe their goals rather than having to write out all the logic. This makes it easy to use and maintain.

Layer0 teams are able to test, review, and version control their edge logic throughout the development process. This means teams can develop against the edge locally and ensure high cache hit rates for dynamic data that’s tied to the application code.

Tooltips are synchronized across graphs on the same screen, making it easier to correlate information across multiple metrics. For example, when hovering over your cache hit rate graph in the Overview tab, you’ll also get the tooltip for the same date in the traffic graph.

Google ranks websites in search based in part on a set of performance metrics called Core Web Vitals, a set of metrics that has a huge impact on user experience. With Layer0's RUM Analytics, you can understand the impact of your site changes in minutes, instead of waiting days or weeks in Google Search Console or Page Speed Insights.

There are charts that show page views, distribution, and RUM events over time, so you can tell what happened last week and how to make that fix, or what you were doing well some few months ago, and how to approach potential Core Web Vitals threats.You can see trends over time and distributions.

View your overall cache hit rate (CHR) for all routes, how CHRs are affected by deployments, and cache purge history. Easily purge the cache by path, surrogate key, or group. Perhaps the most powerful tool is the ability to see CHR by route, alongside traffic, CPU, memory, prefetch hit rate, and more. Unlike traditional CDNS that show every URL that’s ever hit your site, Layer0 integrates with your code base and is route aware, making it easy to see routes that need improvement. This is extremely useful for top performing sites that want to achieve subsecond speeds.

These are just a few of the performance tools on the platform. Together, teams are releasing twice as fast as they were before. John Beadles, Lead Web Developer at TurnKey Vacation Rentals shared, “Layer0 upped our [release] cadence by at least 2x, maybe more.”

And remember: companies’ revenue growth is up to five times higher if they have top-tier developer velocity.

Developers no longer need to manually integrate security into the edge logic. Quickly deploy DDoS, WAF, and Bot management solutions natively into your workflow on Layer0.

Web application firewall with managed rulesets that filter and protect against common and emerging exploits, such as OWASP Top 10 vulnerabilities, Log4J threats, PHP object injection, SQL injections and others.

Detect and manage a wide variety of bots that query their applications and consume valuable resources. Whether they are SEO, search engines, bad data centers, social media, or scraping bots - you have the ability to flag those and stop them if the bot traffic is unwanted.

Productivity, performance, and protection would not be complete if devops teams were not able to release with confidence. Layer0 includes a powerful traffic splitting and feature management tool that runs at the edge with:

These are ‘full stack’ variations that include the browser code, edge code, and cloud serverless code in one atomic package — your DevOps team members know with confidence that your customers are getting exactly what you intended.

Evolve toward microservices and headless

To quickly gain speed, flexibility and agility, customers can easily move to a headless architecture on Layer0, decoupling the frontend presentation layer from the backend logic through APIs.

In this Case Study, Kate Spade (Tapestry) used Layer0 to incrementally migrate to a new version of Salesforce Commerce Cloud.

KateSpade.com is built on Salesforce’s SiteGenesis architecture and fetches business data stored in Salesforce Commerce Cloud through a traditional CDN. However, all pages cached and rendered by Layer0 are now directed straight to Layer0 for a higher cache hit rate. Layer0 sits between Kate Spade’s data layer and frontend.

The previous monolithic platform was accompanied by real physical servers, so higher traffic meant more server load which slowed down the shopping experience. Using a serverless platform like Layer0, KateSpade.com now scales to the level of any traffic.

In terms of agility, updates are quicker and easier with zero dependence on the restrictive Salesforce infrastructure. Before, the team waited weeks to see their updates because it was all part of one build. Now, these updates are broken in chunks, leading to more frequent deploys with lower risk.

Layer0 is the performance leader for headless websites as well, with support for 45 of the top Jamstack platforms and counting:

Simplify and save money

Instead of buying disparate tools you need to cobble together, you can now get the business outcomes you want with a simpler, lower-cost approach. Here’s a view that compares costs of the two approaches:

With Layer0 you can achieve better outcomes at lower cost. Your builder team can stop worrying about the plumbing, and focus their attention on the innovations that will set your solution apart from the competition.

As if doubling your builder team velocity isn’t enough, you can also deliver dramatically faster web experiences. Layer0 by Limelight is the most programmable and fastest web application CDN and edge platform in the world. Developers can control innovative performance features like caching of dynamic data (not just static content) and predictive prefetching into the visitor’s device. More on that in a future article!