Mobile Trends to Watch in 2015 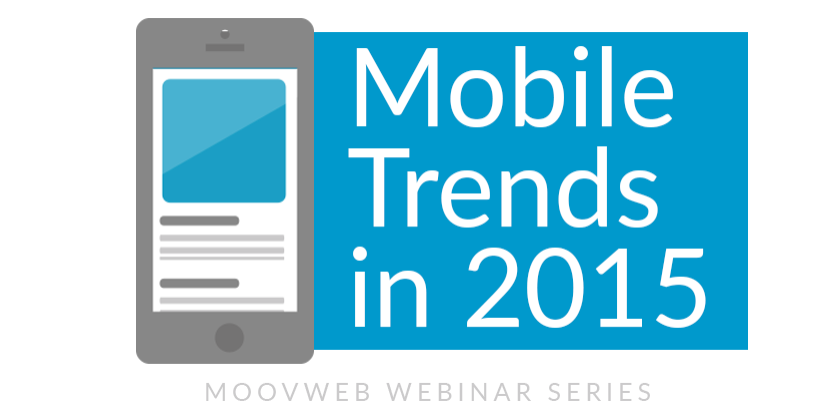 2014 was a significant year for mobile, with mobile sessions surpassing desktop for the first time over the holiday season. And 2015 will no doubt be filled with even more mobile milestones.

In our recent Mobile Trends for 2015 webinar, Layer0 and 64labs outlined some of the key trends we will be seeing in mobile over the coming year.

Let’s look at a few of the top trends:

Deep linking allows developers to link to specific pages or views within apps. These links can come from either the mobile web or from other apps.

This has a number of implications, one of the key ones being for mobile search. Since the mid-2014 launch of Google’s App Indexing feature, which allows for deep linking of content from search results, deep linking has allowed apps to play a greater role in search.

Previously, when one used Google’s mobile search, for say a home in San Francisco, an app like Trulia might appear in search results. But one would then have to search within the app for the San Francisco listings.

Now with App Indexing, the Google mobile search results lead directly to the San Francisco listings within the Trulia app.

This development alone makes deep linking a valuable tool for developers and has led to its increased popularity. But Google was not alone in its launch of a deep linking product in 2014.

In fact, the 2014 launch of deep linking products by Google, Twitter and Facebook (via their App Links platform - an open, cross-platform solution enabling deep linking), has put deep linking in the spotlight. And it will no doubt be a trend to follow in 2015.

Apple Watch, Wearables, and the IoT

Wearables and the Internet of Things made Layer0 mobile trends list in 2014 and are predicted to be a trend to watch in 2015. This year the big change is that Apple is finally entering the game in earnest with its own wearable, Apple Watch.

Whether or not it will suffer the fate of Google Glass remains to be seen. But what is particularly interesting about the Apple Watch is its integration with Apple Pay.

Mobile payment platforms have been around for a few years now, but in traditional Apple style, the company has come to a market with already established players with its own take on the product.

As opposed to Google which has a culture of experimentation, Apple comes to the market with a full-fledged product, with full tech support and partnerships in place.

Will this strategy allow Apple Pay to change the face of mobile payments? It’s certainly a trend to follow in 2015.

Also worth discussing here is the integration of mobile with automobiles. When it comes to technology, there's traditionally a lag in the automotive industry, as it takes 3 to 5 years before an idea really makes it into a vehicle.

And we’ve seen auto manufacturers grappling with how mobile devices should be integrated into their vehicles for a number of years now.

But with the announcement of systems like Apple CarPlay in 2014, there will no doubt be an increased focus on the integration of mobile in cars over the coming year and beyond.

This trend is related to deep linking. Just as one can link to the web from an app, one can link from one app to another.

The ability to link from within an app to another has allowed developers to break out different services into different apps.

Facebook, for example, now has a few apps, most notably Messenger. If you have Messenger installed on your mobile device and you also have the Facebook app, you can navigate from the app directly to the separate Messenger app seamlessly.

And Google has done the same thing with Google Docs. Rather than having all of the different services in one app, they’ve unbundled them so that you have, for example, a separate app for Google Docs and Google Sheets.

Unbundling is a powerful tool for developers. It enables them to make more apps that are more or less sole-purpose. Rather than creating one app that does everything, they can focus on creating apps that do one thing really, really well.

For the last few years, the focus has been on going mobile. On the one hand we have the clear growth of mobile, with mobile traffic to retail sites surpassing desktop traffic over the most recent holiday season.

On the other hand, we have the remaining challenge of mobile traffic converting at about 25% of the conversion rate of desktop.

And whereas we’re at the point now where 64% of the top 100,000 sites by traffic are now mobile-friendly, only 17% are truly mobile optimized.

In 2015, we see the trend moving in the direction of experimenting and testing to gradually move the needle in mobile conversions.

These are just some of the trends Layer0 and 64labs predict will be important in 2015.