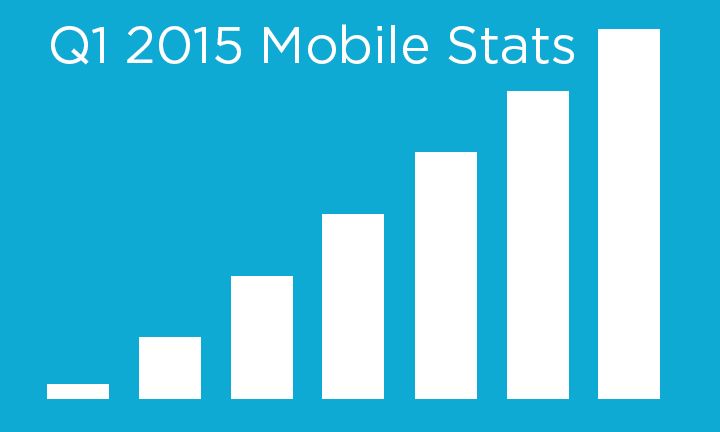 2015 is off to an exciting start for mobile, with more 2015 predictions released, the launch of Apple Watch and Google's search algorithm update for mobile.

2015 is off to an exciting start for mobile, with more 2015 predictions released, the launch of Apple Watch and Google's search algorithm update for mobile.

Let’s take a look at the mobile stats published in Q1 of 2015 that most caught our attention. Some will no doubt surprise you.

The market for personal fitness wearables will reach $5 billion by the end of 2016. (Gartner)

Global mobile data traffic grew 69% in 2014, driven by the addition of half a billion smart devices worldwide. (Cisco)

More than 70% of all Facebook users worldwide will be mobile this year, and by 2018, more than three-quarters will access the social platform via mobile on a regular basis. (eMarketer)

Mobile-focused social site Instagram is the fastest-growing social network posting a 9% growth in 2014 and including 26% of all US adults on its platform. (Search Engine Journal)

More than ⅓ of all app users visit an app 10 or more times per month, an all-time engagement high reached in Q1 of 2015. (Localytics)

17% of US smartphone owners do not accept push notifications from any app, compared to 62% that accept them from select apps. (Forrester)

US mobile transactions grew 10% in the first quarter of 2015. (Criteo)

50% of consumers are familiar with mobile wallets. (Verifone)

Only 8% of retailers are currently using geo-targeting technology. (eConsultancy)

65% of consumers under age 40 are comfortable with the use of in-store tracking technology to deliver offers on mobile devices, versus 50% of all consumers. (Verifone)

By 2017, more than 30% of online travel bookings by value will be made on mobile devices.(Euromonitor)

In Q1 of 2015, the Add-to-Cart rate for web-only companies was 33% higher than for brick and mortar retailers. (Layer0).

It's a big world of stats out there, so if you've got any we should include, let us know!

In the meantime, here's a mind-blowing stat we came across via Cisco:  Global mobile data traffic in 2014, with the addition of almost half a billion mobile devices and connections, was almost 30 times the size of the entire global Internet in 2000.