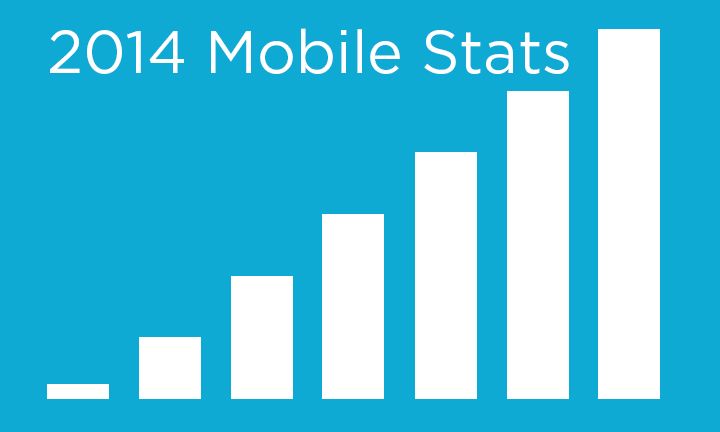 In 2015, for the first time, more than ¼ of the global population will use smartphones. And over ⅓ of consumers worldwide will do so by 2018.

2014 was an exciting year for mobile, with a number of fascinating stats published over the course of the year.

Let’s take a look at the mobile stats shared in 2014 that stood out most - a combination of mobile milestones reached, interesting study findings and even some predictions for 2015.

In the U.S., mobile accounts for 60% of total digital media time spent. (comScore)

In 2014, it was estimated the number of global mobile subscriptions was equivalent to about 95% of the world’s population**.** (ITU1)

In 2015, for the first time, more than ¼ of the global population will use smartphones. And over ⅓ of consumers worldwide will do so by 2018. (eMarketer)    [Tweet This]

For the first time, on Thanksgiving Day, traffic from mobile devices outpaced desktop traffic, with 52.1% of all online traffic coming from smartphones and tablets. (IBM Digital Analytics Benchmark)

In 2015, mobile search traffic will reach a tipping point in which it will surpass desktop traffic. (emarketer)

58% of shoppers who use mobile devices prefer to look up information on their devices while shopping rather than asking store employees**.** (Consumer Electronics Association)

Web-based retailers have a mobile conversion rate that is nearly 4x higher than brick and mortar retailers.2  (Layer0)

About 60% of social media time is spent not on desktop computers but on smartphones and tablets. (Business Insider)

Wearables and the Internet of Things (IoT)

Shipments of wearables were predicted to hit 22 million in 2014, with over 250 million smart wearables in use by 2018. (CCS Insights)

15% of consumers currently use wearable tech such as smart watches and fitness bands in their daily lives. (Nielsen)

More than ⅓ of U.S. smartphone users engage with a retail app at least once a week. (Forrester)

Of course there are more great stats out there than one could hope to round up in one Mobile Stats 2014 post. These were the ones that stood out for us; but if you've got some to add, leave a comment or drop us a line via social media.

Here's one more fun stat that we came across in a 2014 Re/code article that our inner (or in this case not-so-inner) nerds couldn't resist: Smartphones today have more processing power than NASA’s Voyager 1 satellite that launched in 1977, explored Jupiter and Saturn and made history when it journeyed into interstellar space!

_ 1 ITU is the UN specialized agency for information & communication technologies._
_ 2 Based on Layer0 mCommerce Q4 2014 Index, encompassing 200B+ pageviews and 500M+ sessions._