IR500 Performance Scores Are Highest with an In-house eCommerce Solution 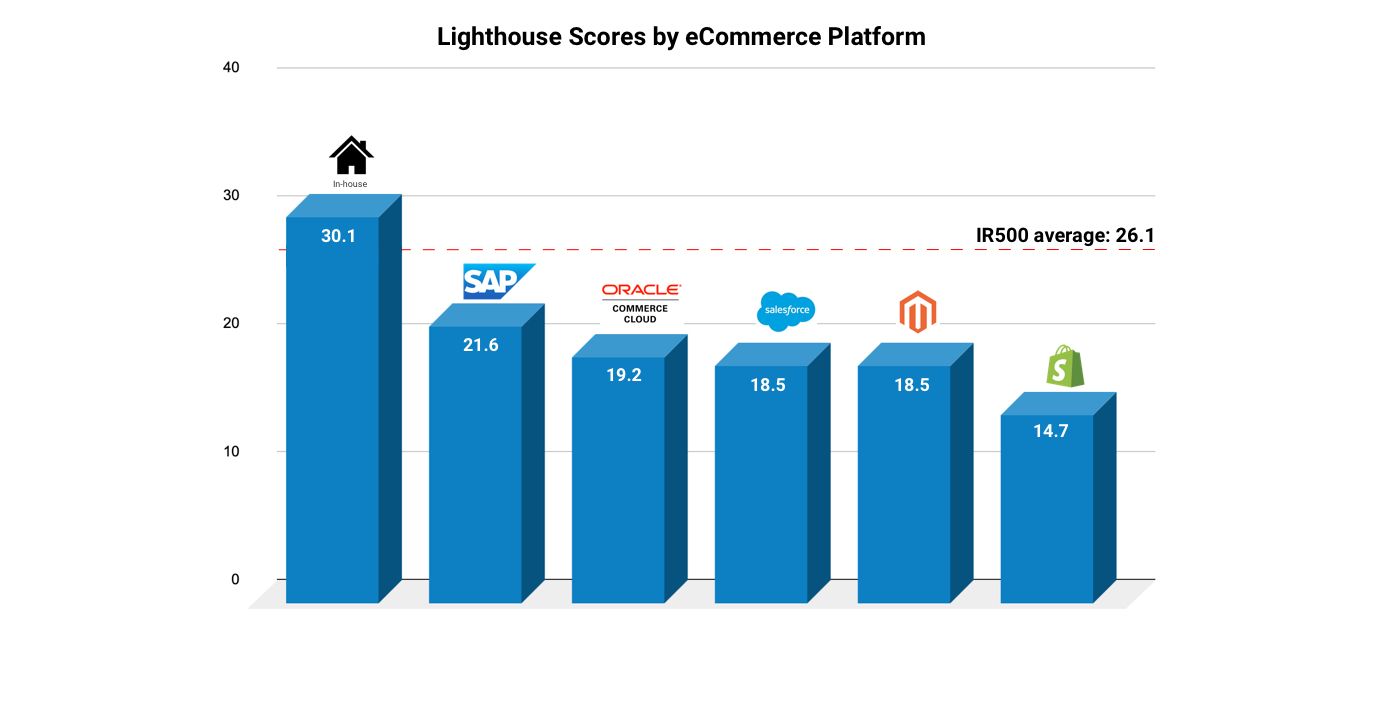 The leading eCommerce websites have gone (or are in the process of going) headless. To keep up, eCommerce platforms have been working on ways to support modern, API-driven frontends. Some have invested in creating their own storefront frameworks, like Magento PWA Studio, SAP (Hybris) Spartacus, while others have invested in creating great API coverage, like Shopify. While every platform is different, speed should always be a priority. Especially in the days of COVID-19 and stay-at-home living.

Website speed impacts your entire digital strategy, from SEO ranking to traffic to conversions and revenue. As Google’s Lighthouse performance score has become akin with site speed, we analyzed the performance scores of the leading 500 US internet retailers (IR500) by eCommerce platform to assess which platform delivers the fastest sites. The surprising answer is: none. In fact, we found that in-house systems outperform the leading eCommerce platforms by 61%. Read on for our detailed findings.

How does the IR500 perform?

The average Lighthouse mobile performance score for the IR500 was 26.1 with a median score of 22 and a standard deviation of 18.9 points. This indicated a positively skewed distribution, where half of the leading 500 eCommerce sites by revenue scored 22 or less. On a percentile basis, 75% of the sites tested had a performance score of 37 or below, and 90% of the sites tested scored a 55 or lower.

The 90th percentile is interesting, as Google stated that a performance score of 50 marks the 75th percentile, when looking across their dataset. While the unique nature of eCommerce websites (e.g. dynamic pricing, real-time inventory, etc.) is known to slow a site down, the extent that the average eCommerce site is slower than other types of sites, such as publishers and other static sites, wasn’t known. Until now.

(Our methodology and more info about Google's PageSpeed Insights and Lighthouse Scores can be found at the end of this article.)

In contrast, the average performance score for websites using in-house / homegrown eCommerce systems was 15% higher than the IR500, with an average of 30.1. Perhaps this is one of the reasons that nearly a fifth of the IR500 websites use their own, in-house solution.

While the average website on these three platforms underperforms the average for the IR500 by almost 30% this doesn’t mean that sites on these platforms are inherently slow. For example, AKIRA on Magento and Planet Blue on Shopify scored a 74 and 67 in Lighthouse, respectively. Each of these scores are higher than the average for their eCommerce platform by 4-fold. Another example is Shoe Carnival on SFCC. The retailer scored a 70, which is 3.8x the average performance score for the platform. These three websites are examples of the performance scores you can attain with an instant website on Layer0.

The average performance score for the leading US 500 internet retailers by revenue is 26.1. This score can easily triple with an instant site on Layer0. We’ve helped complex eCommerce sites with dozens of tags, real-time inventory, and dynamic pricing hit mobile performance scores of +80 and we can do the same for you.

At Layer0, our goal is simple: We want to make the Web instant. And we won’t stop until shoppers' needs are met, and our customers experience a substantial lift in their bottom-line. Websites on Layer0 see median page loads of 320ms (FCP), and organic traffic and conversion lifts in the 15-30% range.

Layer0 let’s developers squeeze every millisecond out of every speed optimization effort (client-side, server-side, and on the CDN level) through the combination of cutting edge tech, including portable frontends with built-in AMP and server-side rendering support, predictive prefetching, and a CDN-as-Code that streams and caches dynamic content at the edge so that your site remains 5 seconds ahead of shoppers’ taps.

In the wake of COVID-19, we understand time is of the essence. We can drop page loads down to 1-2 seconds in just one week, or down to 320ms medians (FCP) in a matter of weeks.

Schedule a consultative conversation now to learn how Moovweb can help you build a sub-second website, boost your SEO and increase your revenue.

The data shows that faster websites are seen on in-house / homegrown solutions, rather than the leading eCommerce platforms: Salesforce Commerce Cloud, Magento, Shopify, SAP Commerce Cloud (Hybris), and Oracle Commerce Cloud. The average performance score for IR500 websites on these leading platforms was 18.7. In-house solutions saw scores over 60% higher than this.

While we found Lighthouse scores on these platforms to be surprisingly low, we also found that these sites aren’t inherently slow, and speed can be improved on the right infrastructure. Our Magento, Salesforce, and Shopify customers are seeing at least 4x the average Lighthouse score for their eCommerce platform, on Layer0. With a March 2020 update to Layer0, sites are able to achieve scores in the high 80s and 90s. Just take a moment browsing through TheTieBar.com, ShoeCarnival.com, AKIRA.com to experience instant for yourself!

We can get your page loads down to 1-2 seconds in 1 week, or can get your site sub-second in just a few. If you’re looking to increase organic traffic, conversions, and revenue, schedule a consultative conversation with a site speed expert to discuss your options.

In the first week of February 2020, we analyzed the mobile site speed of the homepages of all the primary domains of the leading 500 US internet retailers (IR500) by revenue, using Google’s PageSpeed Insights web performance tool. The IR500 serves as a reasonable snapshot of the best eCommerce companies in North America and includes known names such as Amazon, Apple, Williams-Sonoma, Overstock and more. Note that of the 500 companies in the IR500, 11 were excluded because their site was not directly transactional, the site was no longer live, or PageSpeed Insights was unable to analyze the page. At the time of our analysis, PageSpeed Insights was still using Version 5 of Lighthouse. A new scoring change is coming in Version 6, which is currently in Beta.

PSI analyzes a site using two underlying tools. The first is what’s called lab data (sometimes called “synthetic data”). This is generated by an automated process that loads the page in a browser site load on Google’s server and analyzes it with the open-source Lighthouse tool. Running Lighthouse through PSI essentially removes device-based variation in lab data. The second tool used is Google’s Chrome User Experience Report (CruX), which provides real-user measurements for site speed. The difference here is not only in RUM vs synthetic data, it is also in the devices used to test a site, which in the US tend to be faster than the PSI defaults (e.g LTE vs 4G)

For more about why Lighthouse scores as measured by PSI matter, check out this article.