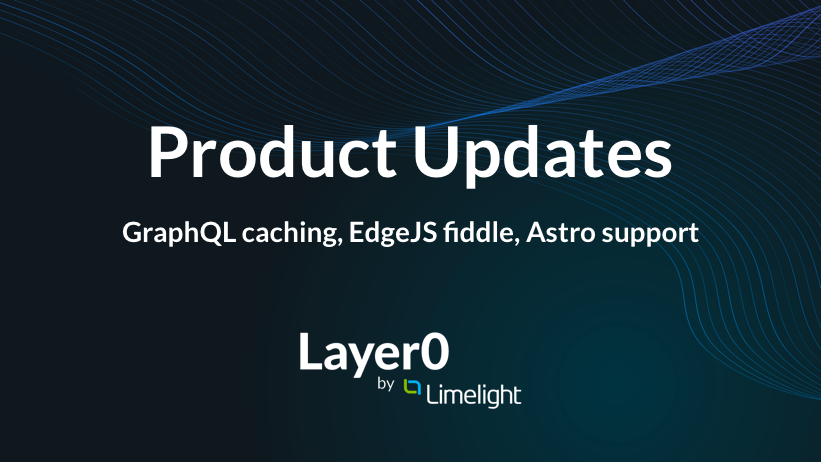 Product newsletters are back! We, at Layer0, have been busy joining forces with Limelight, one of the largest, private CDN networks on the planet, and have exciting updates. Read on to learn about caching GraphQL APIs at the edge, using our platform as a web CDN for any backend platform or front-end framework, and how to test drive EdgeJS for low latency and high performance.

Learn how Universal Standard achieved a 200% increase in mobile conversation rate with a Shopify eCommerce site leveraging Layer0 and Nuxt. It’s all at Vue Nation. You’ll discover developer tips for a seamless migration and techniques you’ve got to attend to see.

Layer0 provides full support for caching GraphQL APIs at the edge. Putting Layer0 in front of your GraphQL API can significantly improve its performance while reducing the amount of traffic that reaches your origin. Start creating powerful custom caching logic based cookies, authentication, URL patterns, and HTTP headers on Layer0 today.

Layer0 software powers best-in-class headless websites across multiple industries. Now that same Layer0 software is available as your web CDN for any backend platform or front-end framework. And it’s all delivered from the edge of Limelight’s massive global network. Any website can now accelerate both builder velocity and website performance. Fast onboarding flow allows you to create and deploy your site in minutes.

Get started or Watch the 2-minute

EdgeJS is a JavaScript-based, performant, declarative, and framework agnostic language for edge logic. It lets developers write edge logic in familiar JavaScript that Layer0 platform compiles down into native code, proving you the best of both worlds. Embed edge logic directly in your application code — and it will run with lower latency and faster performance. Want to try it? The EdgeJS Fiddle page simulates the Layer0 Edge Network, allowing you to easily try EdgeJS in your browser.

Astro is a hot new tool for building incredibly lean static websites with your favorite framework, including React, Svelte, and Vue. By default, Astro ships 0 JavaScript to the browser, only loading fully interactive components as needed. While Layer0 has always been framework agnostic, we've recently added automatic configuration support for Astro to get started quickly with less config.

Convert a REST API to GraphQL! This demo walks through how to do it and add caching at the edge, using the popular Next.js framework, Apollo Server, and Layer0.

GraphQL is a popular query language for reading and mutating data in APIs and is a key technology in the trend toward headless websites for flexible, powerful, and efficient. APIs. Developers face challenges, however, when caching GraphQL APIs at the network edge. Layer has developed a solution that makes edge caching easy for GraphQL at a granular level, based cookies, authentication, URL patterns, and HTTP headers.

It's time to rethink how to bake the CDN into your stack. Layer0 by Limelight is a new Edge platform that helps improve team velocity and unleash the fastest possible sites.

The Future of PWAs with Alex Russell and Frances Berriman

Husband and wife team Alex Russell and Frances Berriman, coined the term Progressive Web Apps (PWAs) in 2015. Tune into this episode of JavaScript Jam to hear their take on the current and future state of PWAs, engine diversity, and framework choice.