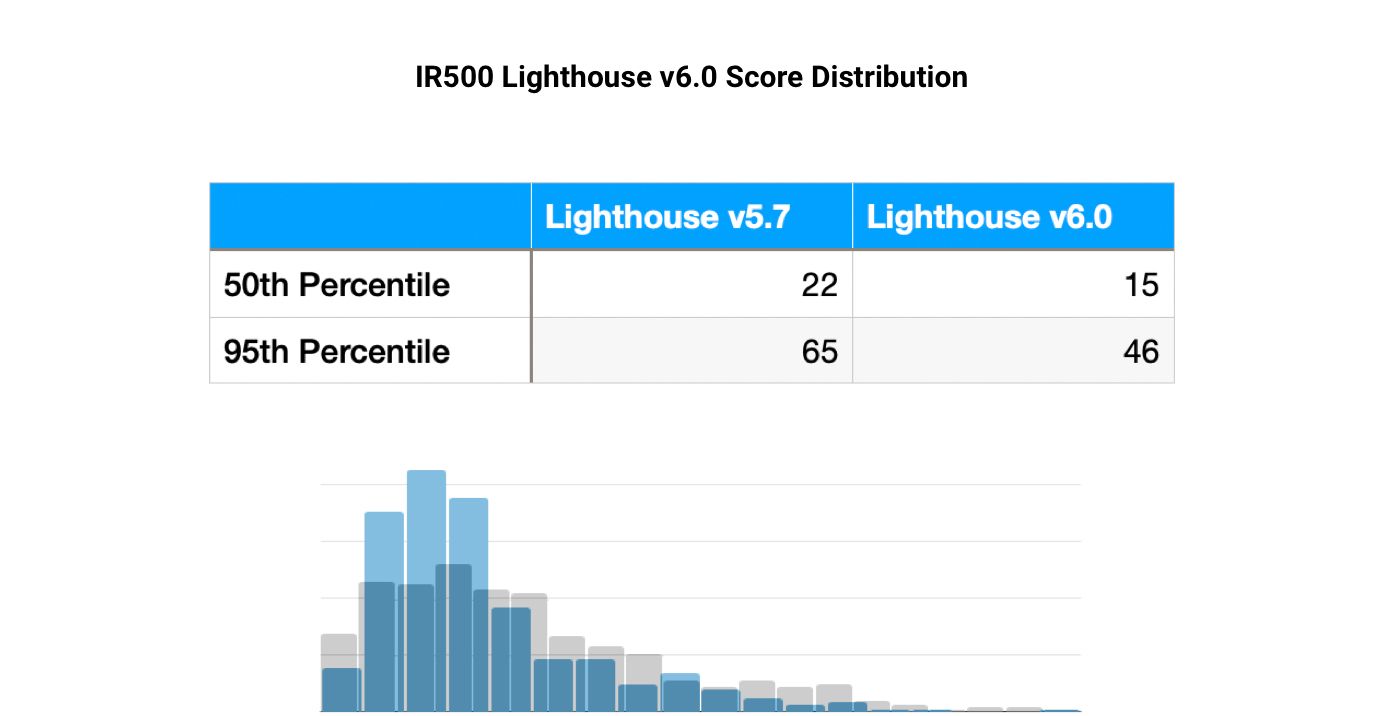 Lighthouse v6.0 is out and wreaking havoc on eCommerce website performance scores. The top 500 internet retailers in the US have seen their scores plummet.

Lighthouse v6.0 was released a week ago and the impact has been immediate. Nearly 75% of the biggest and best eCommerce websites saw their performance scores plummet. Median Lighthouse scores slipped to a low 15, with the 95th percentile mark dropping a whopping 19 points to 46 on Lighthouse v6.0.

The new version of Lighthouse introduces new perceptual speed metrics (Largest Contentful Paint, Total Blocked Time and Cumulative Layout Shift) which account for more than half of a website’s Lighthouse v6.0 performance score. As a result, most retailers have seen their Lighthouse scores take a hit. eCommerce websites performance scores tend to be lower than those of non-commerce websites (such as publishers), and the gap has just widened.

Interestingly, the highest ranking eCommerce sites on version 6 of Lighthouse are somewhat reminiscent of simpler times. The highest performing website, RockAuto.com, hosts images capped at 142KB. The runner up, Bol.com, saw 8 points shaved off in the transition from v5.7 to v6.0 and now scores 74. Read on for our full analysis of the IR500 Lighthouse v6.0 scores.

Lighthouse v6.0 brings lower scores. The median performance score for the top 500 US internet retailers based on revenue (IR500) dropped from 22 to 15 on May 28th when Lighthouse v6.0 went live. 72.1% of the sites are seeing lower scores than before, 25.2% are seeing slightly higher scores and 2.7% have seen no change in their performance scores. The average difference in website scores between the two versions is a 7 point loss and the highest score has dropped from 96 in v5.7 to 87 in v6.0.

You can see a full breakdown of the performance score shifts for the top 500 eCommerce websites in the table below:

Resize the browser window to see the responsive effect (the columns will stack on top of each other instead of floating next to each other, when the screen is less than 600px wide).

Schedule a call with a site speed specialist today to learn how Layer0 can help you combat the effect of Lighthouse v6.0.

The biggest winners and losers

Lighthouse v6.0 winners are fewer and their gains are more moderate. Shoe Carnival and Staples are the only two to see their Lighthouse scores rise by 20+ points on v6.0. While both websites use portable frontends built for speed, ShoeCarnival.com has the upper hand with its sub-second website on Layer0.

Glossier and Hello Fresh saw a 17 point boost to their performance scores, while Wayfair and LEGO saw their scores rise by nearly 10 points on Lighthouse v6.0. Lastly, REI, Macy’s and CalvinKlein.com saw modest increases of 5 points to their website performance score on the new version of Lighthouse.

The highest performing website on Lighthouse v6.0 displays images that are capped at 142KB.

A quarter of the IR500 websites have seen modest increases to their performance scores, but these are nothing compared to the losses. The largest score increase was 22 points, while the largest decrease was 78 points!

The highest performing websites on Lighthouse v6.0 are anything but image-rich. The new version and the most important metrics that were introduced with it, such as Largest Contentful Paint and Cumulative Layout Shift, favor websites that display pages to users as quickly as possible and with minimal jank. These tend to be either simple websites with limited assets or websites with server-side rendering support to translate JavaScript to HTML on the server, thus substantially cutting load times and ensuring the site can be indexed by search engines.

Layer0 has built-in server-side rendering support so that you can have the best of both worlds: an image-rich website that loads in the blink of an eye. Layer0 is the only platform on the market to guarantee sub-second page loads for large eCommerce websites.

Schedule a call with a site speed specialist today to learn how Layer0 can help you combat the effect of Lighthouse v6.0.