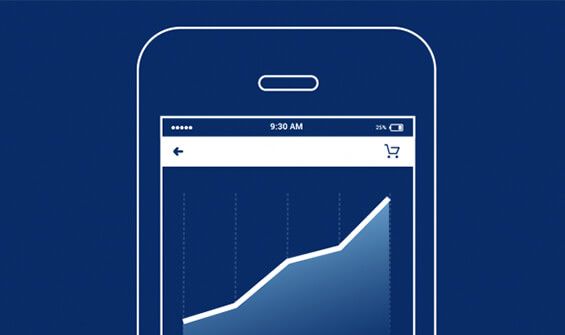 For our 2015 Mobile Holiday Shopping Report, we tracked the e-commerce metrics for 30 mobile experiences of retail market leaders.

Our analysis of approximately_ 13.5M _sessions during Cyber Week, the 5-day period from Thanksgiving to Cyber Monday, yielded some fascinating insights into the latest mobile holiday shopping trends.

Mobile accounted for over one in three transactions, with Cyber Monday taking the crown as the biggest mobile shopping day.

This trend was expected, however a number of insights were surprising.

The YOY growth of smartphone revenue was even bigger. In fact, at 81%, it was nearly twice as large as the growth in traffic.

Mobile devices continued to gain on desktop in terms of both traffic and revenue over the course of Cyber Week.

The combined smartphone and tablet revenue share of 28% of total Cyber Week revenue represented a 10% jump compared to last year.

In terms of traffic, the YOY growth of combined smartphone and tablet visits was a more conservative 4%.

But mobile device traffic still increased its lead over desktop traffic. This year, nearly** 6 out of every ten** visits during Cyber Week were on mobile devices.

Tablets, on the other hand, saw a 10% drop in sessions and 13% drop in revenue during Black Friday and Cyber Monday.

Of the three main shopping days - Thanksgiving, Black Friday and Cyber Monday - Black Friday had the highest year-over-year increase in revenue: a whopping 95%.

Black Friday also had the highest YOY increase in visits: an impressive 52%. While in some cases Black Friday may be dead, it certainly doesn’t seem to be the case for smartphone shoppers.

However, the Average Order Value on Thanksgiving was lower compared to the AOV last year. Factors that could have contributed include:

But this year, a number of retailers kicked off their Black Friday and Cyber Monday deals earlier.

Would this erode the dominance of Black Friday and Cyber Monday?

Cyber Monday retained its leading position in terms of revenue. It generated 37% of the revenue recorded over the three day period - ** 1.3** times as much as Thanksgiving’s revenue share.

While Monday was the leader in revenue, Black Friday took the number one spot in terms of share of traffic, with 15% more visits than Cyber Monday.

Mobile consumers were intrigued by Black Friday deals, prompting mobile site visits. And they were in fact shopping more than last Black Friday.

But the gap between a higher percentage of visits and lower percentage of revenue indicates _Black Friday remains a unique opportunity _for retailers to convert mobile customers.

As for Thanksgiving, for some industries such as Apparel and Accessories, we saw a larger YOY growth in revenue on Thanksgiving than on Black Friday. However, in aggregate, Black Friday remained the bigger shopping day.

MOBILE SHOPPERS IN THE SOUTHEAST MOST LIKELY TO BUY

The Southeast proved to be** highest converting **region during Cyber week.

And the Northeast had the lowest conversions.

However, there were a few states in the Northeast where smartphone shoppers converted at higher rates than states within the higher converting Southeast region.

MOBILE SHOPPERS SHOPPING AT ALL HOURS

With so many consumers bringing their smartphones to the Thanksgiving table, we had to wonder: would the opportunity to shop “under the table,” lead to a difference in online shopping behavior by device.

Our analysis of shopper behavior by hour on Thanksgiving and Black Friday some fascinating findings.

The peak hour for desktop shoppers on Thanksgiving was 8:00 p.m. Pacific.

And the peak hour for smartphone shoppers was 9:00 p.m. Pacific.

Desktop shoppers had two distinct periods of heavy purchasing activity: an initial mid-morning spike and then a bigger, more sustained spike from about** 6:00** p.m. to 10:00 p.m. Pacific.

Interestingly, on neither device did consumers shop much during the middle of the day, indicating mobile users were not shopping quite so much during the Thanksgiving meal. Phew.

On Black Friday, desktop shoppers again had two distinct periods of heavy purchasing: from mid-morning (9:00 a.m. to 11:00 a.m.) and then again in the** evening.**

The peak hour for desktop shoppers on Black Friday was 8:00 p.m.

Unlike desktop shoppers, which had pronounced peak shopping hours on both Thanksgiving and Black Friday,_ once smartphone shoppers began making purchases in the morning, they continued to shop at a relatively steady pace throughout the day_.

Although iOS phones account for only 44% of the smartphones in the U.S., they frequently account for a higher percentage of traffic and revenue to e-commerce sites than Android phones.

Our data showed that over the period of Cyber Week iOS phone owners generated significantly more traffic and revenue.

Just over ⅔ of visits were via iOS phones.

Meanwhile, nearly ¾ of the revenue came from iPhone shoppers. This was driven not only by a higher percentage of visits but also by a higher conversion rate.

So not only were there more iPhone shoppers than Android shoppers, but iOS shoppers were also** 21%** more likely to buy.

Shoppers continued to go mobile this Cyber Week - at a rate even greater than last year.

They’re no longer turning to their mobile devices just to comparison shop or find a store.

And savvy retailers are taking notice.

For many shoppers, it’s well on its way to becoming the primary one.

About  Layer0  and the Mobile Holiday Shopping Report
Layer0 powers the mobile experiences of over 120 of the world's leading brands. For our 2015 Mobile Holiday Shopping Report, we tracked the e-commerce metrics for 30 mobile experiences of retail market leaders, representing a variety of sectors, including apparel and accessories, jewelry, health and beauty, electronics, home and garden, and gifts. We analyzed a total of 13,487,628 visits from Thursday, Nov. 26, 2015 – Monday, November 30, 2015.